“Oh my goodness,” Mom said in a whisper. She stopped mid stride and stood bolt upright like a toy soldier, but with her mittened fingers pressed against her mouth. Her eyes welled up as she took in the view of endless hills topped with autumn colored cotton candy as far as the eye could see. She exhaled the word “Wow” as her fingers slid down her chin and rested on her heart.

Mom and I left Florida and meandered north, having no idea where we would end up. Four days later we arrived in Vermont, just before the peak of fall colors. After a few days of exploring Northwestern Vermont and Lake Champlain, we snaked east on country roads where our eyes feasted on rolling hills in shades of crimson, gold and burnt orange, and brightly colored barns nestled near fields of neat corn stubble.

We landed in the rural town of Topsham at my friends’ small farm. Saturday morning Peter and Pearl invited us to go with them to a spot where we’d have a 360 degree view of both Vermont and New Hampshire. We bundled up in layers and drove tiny dirt roads that only the locals knew. The last one was just two tire tracks through a tunnel of butterscotch leaves. We parked, strolled across a field and up through a stand of trees. Crisp cobalt sky with wispy white clouds peeked in between maple branches. When we walked out from under the trees and up onto a hill of grass, the panoramic view struck us, all at once. And that’s right where Mom stood. 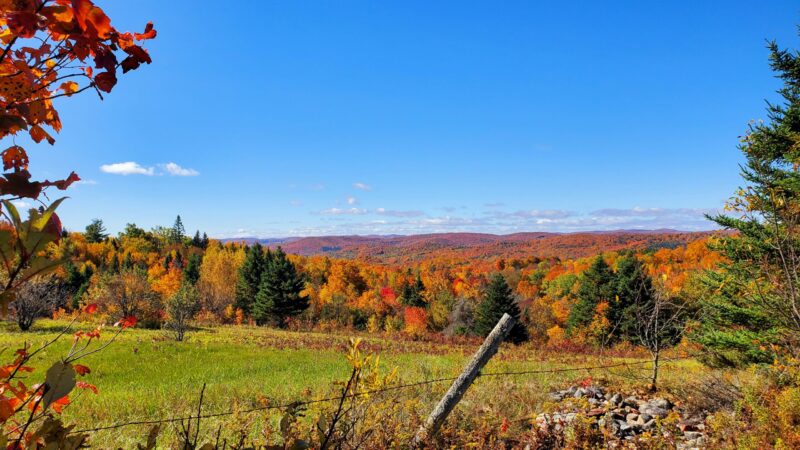 “I’ve never seen anything like this!” Mom exclaimed. She sounded like a little kid. I was amazed too. It felt more like I was inside a dreamlike painting than in real life. Even Peter and Pearl were in awe and they’d lived in Vermont forever.

We continued toward the top of the hill, with frequent stops to gaze. We plucked wild apples and munched on them as we strolled along the winding path. At the crown of the tippy top we stood and took it all in. 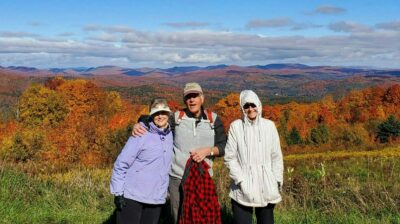 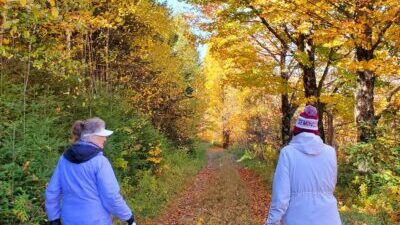 As we began our stroll down, Peter and I walked side by side about 20 paces behind Mom and Pearl, who were giggling and chatting. Peter stopped. I stopped a half pace ahead, turned back and looked up to him.

“Look at this,” the words fell out of Peter’s mouth as he choked back tears. His palms were turned up and arms open as if he were holding the world. Everything fell away and I just saw him: this kind, strong 79 year old man, overcome with awe on a hillside. My heart bubbled over with love. “Look at all of this,” he caught his breath again and sniffed. “All of this, and still . . . people are at war.”

My heart dropped and I turned to look behind me, in the direction he was gazing. I breathed in the sea of mountains painted in autumn colors and the delicate clouds in a perfect blue sky. I saw it all again through different eyes. What a gift all of this is. What an astonishing and gorgeous world we get to live in. What a stunning place. And not just this beautiful scene in Vermont, but everything. Everywhere. Even cityscapes and deserts and the arctic tundra and the plains of Africa. I felt goosebumps on my arms and legs and tears in my eyes.

“How can people think war is the answer when we all have all this?” Peter asked, holding back sobs.

Peter and I stood together and looked out as a cool breeze rippled the green grass down the hill.

“I wish we all could see and understand what you see and feel right now,” I said.

Peter and I set off again down the hill and caught up with Mom and Pearl who were still gabbing like old friends. Peter and I strolled along behind them in silence for a few minutes and then we all chatted while we walked down the path together. What a gift, in so many ways, a gift to know Peter and to witness his heart and his kindness and his grit. It feels like I’ve known Peter and Pearl forever and it feels like one of life’s special gifts that we met and that we are friends and that he thinks of me as a daughter and that we are truly family.

We first met two years ago, deep in the boondocks of Maine, when my path crossed with two couples traveling together in their RVs. We chatted for half an hour or so and both couples invited me to camp on their properties. One couple lived in New Hampshire and the other in Vermont. The four of them were lifelong friends and they all were in their late 70s.

Within a month’s time I spent few days with each couple on their farms. That was in October 2020. Peter and I have written each other several times since. A few weeks ago I reached out to Peter and Pearl (as well as the other couple, Russ and Joan) about visiting. Coincidentally they were all camping together in Vermont this time around!

As Mom and I pulled into the Suitsus Farm in Topsham, Vermont last week, it felt like coming home. It was Friday evening and I’d told Peter and Pearl we’d arrive Saturday morning. They were still out of town and I had called twice, texted and sent an email without a response. Mom thought I was a bit nuts showing up on people’s property unexpected, but I knew there was no cell service and I also knew Peter and Pearl would be thrilled we were there, early or otherwise. About an hour after Mom and I were settled in, we heard the happy tooting of a horn and saw a blue car bounding across the field towards Coddi(my Airstream trailer). We all jumped out and hugged. We’ve met twice and it’s been two years since we’ve been together and we are as close as family.

This is home . . . Peter and Pearl’s place is as “home” as anywhere. There are many places like this, and there is only one like this one. All roads lead to home.

This experience is a snapshot of my life, and it’s as unique as ever and feels as normal as anything I could have imagined. Mom has enjoyed getting to know some of the family I’ve been telling her stories about . . . angels are everywhere. Take a look at this place . . . It’s heaven. 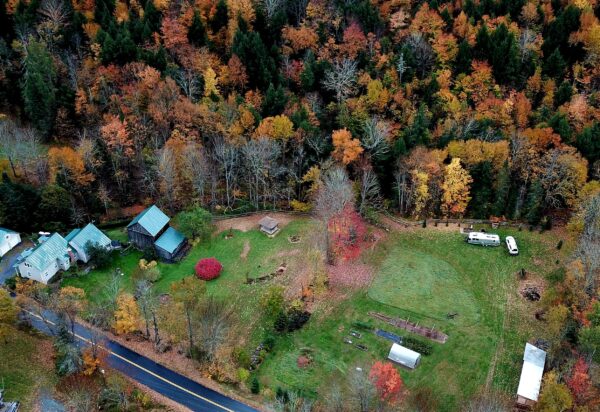 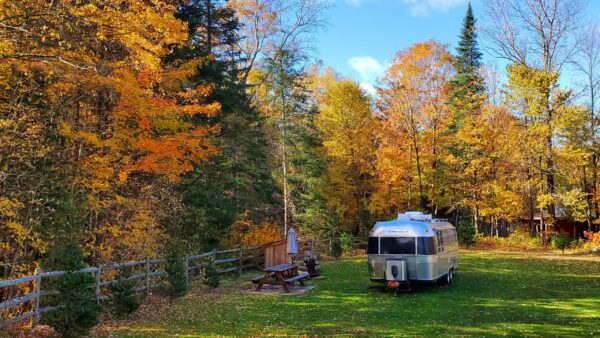 Ground level view of our campsite at Suitsus Farm

One last snipped to share (there are SO many thoughts and feelings I could share just from this last week alone): A couple days after the experience of taking in the sea of colors at the top of the hill, Mom admitted she had never seen fall colors. My jaw dropped.

“I never realized what I had missed,” Mom said, “until I saw all the colors and the trees and the rainbow of leaves. I never considered that I hadn’t seen fall outside of Florida. Now that I see them, I realize this is a first for me.”

What a first! It’s been such a joy seeing Mom like a kid, becoming aware of all this for the first time. It reminds me how that happens to all of us: we don’t know what we don’t know until we see something different, fresh and new . . .

Then we see life through new eyes. 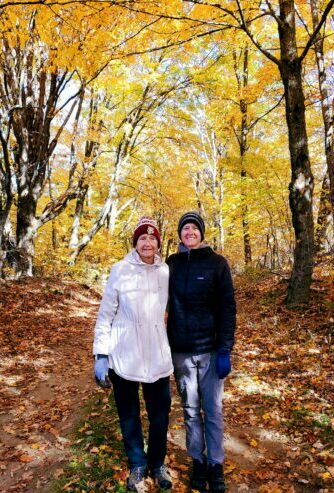 I’ve traveled all over the world for the last five years and I’ve run a business that more than sustains my lifestyle the entire time. Life and business seamlessly meld into one. The lines are so blurred it’s difficult to tell when I am playing and when I am working. It’s a dream come true and for the first time I am offering a group program that will help you realize your unique way of living your version of freedom in business.

This small group program is about getting to the heart of realizing freedom and self expression in entrepreneurship, making a difference in the world through business offerings, and exploring the nuts and bolts of growing a successful business.

In this group we’ll also have guest appearances from eight practiced professionals, each have created unique and highly successful businesses. Check out to link below to see who they are! We will point you to have fun, be you, and be the only one that does what you do.

Get articles like this one delivered to your inbox

If you would like to receive intriguing stories, thoughts and ideas in your inbox once every month or so, sign up for the newsletter by clicking HERE

← I Sleep in a Dream Waking Up from Reasonable →