Twelve years ago at around 2:00am a couple of firefighters had just returned from a medical call. Only the clicking of the keyboard broke the silence of the early morning stillness in the fire station as the details of the call were being recorded in the medical report. Interrupting the clicking of the keys was a single sentence said with soft resolve: “I love souls…” I stopped typing and slowly turned toward Randy who was sitting next to me. He was now silently gazing back. I wondered if the lack of sleep was getting to him and equally wondered what he was talking about.

“I love souls. It doesn’t matter what body they are in…” Randy calmly stated.

It took me a moment to realize what he was saying. Randy was married and had a three year old son. He was one of my favorite guys at the fire department, although we rarely worked together and weren’t close friends. He was a newer firefighter: very kind, courteous, a hard worker and seemed to have his life together. We hadn’t talked about anything deeper than what to have for dinner or what we had done for fun recently. This conversation (that had so far consisted of three sentences) suddenly had a gentle significance. I turned away from the computer and gave him my full attention.

Randy continued on about how he loved souls. It was obvious that he loved souls in general: He was a kind and compassionate guy. What Randy was specifically referring to was romantically. He explained that sometimes the soul had female body and sometimes the soul had a male body, but that didn’t matter to him: he loved souls, not the cover. I listened with tender intention without saying a word. I can’t remember the rest of the conversation, but the seed of a deep friendship was planted early that morning in the silence of a quiet firehouse. He asked that the conversation be kept private and we said goodnight before retreating to rest while waiting for our next call.

Through or friendship and our working relationship I saw on a deeper and deeper level what Randy meant by “I love souls.” He loves, listens, and cares for whoever crossed his path. His home doubled as an animal shelter: he took care of and loved the furry friends that no one wanted. He brags on just about anyone- always seeing the best in people and connecting those that can help each other. He truly loves souls in such a unique way.

Fast forward several years later. Randy, now a single father raising his son, had just returned from a short vacation in Boston. He and I were in the kitchen of the firehouse cooking together. Randy was glowing and couldn’t wait to tell me about a guy he met in a bar in Boston. They had chatted for a while and exchanged information. There was a special bond and Randy went on and on… I thought it was cute and listened contently. Even though I didn’t burst his bubble, I really wanted to say “Randy, really? A random guy in a bar in Boston?? These things never work out.” I kept my thoughts to myself and listened as Randy seemingly floated around the kitchen.

Fast forward more than seven years after the conversation in the kitchen and well over a decade after the “I love souls” conversation. The scene: It is a crisp mid-October evening. We are at a beautiful vineyard in New Hampshire as the sun is beginning to set. The soft orange glow is creating an unbelievably rich postcard like back drop of fall colors. There are 150 of us sitting in simple white wooden chairs. There are close to 300 eyes welled with tears… beautiful love filled tears. There is a soft but silent focal point. We are all mesmerized by the most gorgeously touching wedding ceremony.

Randy is standing to the left struggling to read his vows through overflowing emotions; Kaiden, Randy’s son and best man (who is now fifteen years old), has tears of love streaming down his face; and across from Randy is Jon, the kind and handsome young man Randy met in the bar in Boston seven and a half years ago. The vows being exchanged are the most heartfelt and deeply touching vows imaginable: Such an example of adoration, profound friendship, and love.

Kaiden has two fathers and a rich family atmosphere that is helping him grow into one of the finest young men I have ever met. Jon is the father and husband he always dreamed of being. Randy not only has a loving, strong, and kind partner, he also has the huge loving family that he’s always wished for. The foundation of all of this is love… a love of souls.

What’s even more interesting is how Randy’s love of souls has permeated so many. The 150 of us sitting together in the crisp fall air were loving souls. We were loving Randy, Jon, Kaiden, and their families. We were in love with each other- all of the varied friends and family that had come together to celebrate love. There were people with a slight southern twang, Harvard doctors, military vets, scientists, gay couples, straight couples, single people of all kinds, and many varied races, religions, ages… None of that mattered. There was only love.

What a journey it has been to the vineyard. There have been tears of all kinds, struggles, laughter, friendships, and love… lots of love. Randy and I experienced lives that ebbed and flowed, continually crisscrossing in unique and beautiful ways. Over a decade early in the wee hours of the morning when Randy first shared “I love souls,” neither Randy nor I in our wildest dreams could have imagined sitting in that vineyard. But it happened… it all unfolded beautifully. 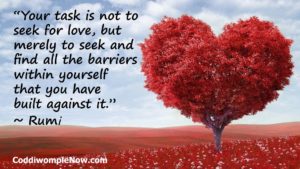 Randy Coddiwompled his way from an average life in south Florida working as a firefighter to being one of the top up and coming doctors in Boston. In just two years he went from a single dad and student to happily married, running a thriving wellness center, and lecturing to doctors at Harvard. He truly UNpredicted his journey and the unimaginable happened. Check out his story!